Back in June Dave over at Wargames Terrain Workshop threw down the challenge gauntlet for terrain building in July and August. I had already started a larger (for me) terrain piece and thought this would be the perfect kick to get it done. I find challenges extremely useful to shame me into actually concentrating on a single project. I have a dozen or more in progress at any one time, because i need to feel a project to have motivation to work on it.

I have WFB, 28mm and 15mm WW2, 40K, SAGA, 15mm Ancients and Wild West minis and terrain pieces stashed around my work bench. All in various stages of progress from de-flashing to mid-paint. Then the Boxes of Shame conceal even more minis still on sprues or in blisters. A couple plastic totes hide terrain pieces i lost interest in, for now. A challenge is public shaming (in a good way) for unfinished projects. It adds a little motivation to finishing a particular thing.

Dave’s challenge came at a perfect time. I had started a windmill built or card, basswood, foam blocks and various other materials. I had a clear idea of what i wanted it to look like. I had a decent start to the base. But I was kinda stuck in a rut. Challenge accepted Dave, challenge accepted.

Just to consolidate a bit, I will re-post a couple pics of the whole project. The core of the base came from a set of nesting round cardboard boxes. Covered in foam blocks I cut on my then-new Proxxon, it looked like this: 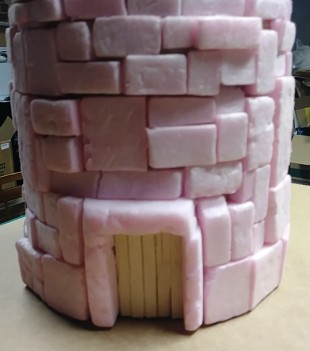 I built the next portion from some wood craft sticks. I am not even sure what wood they are. Its not balsa, for sure. It doesn’t seem to be basswood either. Bit, it takes textures nicely and cuts easily. I found this at our local grocery/department store in the craft aisle and really like the wood. Unlike the round end craft sticks, these are squared off. No wasted material! Its the Simply Art line from Loew-Cornell. Give them a try, they might be something uyou can use in your terrain builds. I did get panicky. The store i bought them in didn’t have them for a while (thanks C19) and then moved them. I finally located the new spot and restocked for my current build.

Then on to paint before building the upper portion. 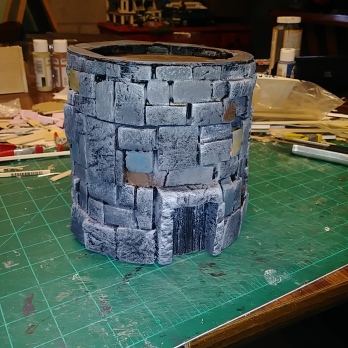 The upper portion, holding the axle for the sails, ended up being the most difficult portion. Version #1 was started on a pair of cardboard disks to which i glued more craft sticks.  It was a complete disaster. As hard as I tried, it wasn’t even or level. It was so ugly i didn’t both to take a picture. I was only half finished when I tore it apart to recycle the precious craft sticks.

Version #2 came out much better. I used the smallest of the nesting boxes as a core. It had straight and level sides. It was sturdy. All i had to do was construct a fiddly conical roof for it. And then attach it securely to the rest of the mill to support the weight of the sails. 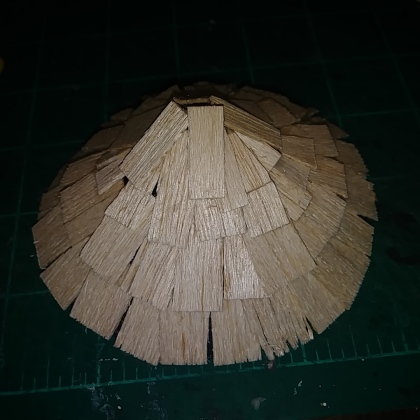 following Mel the Terrain Tutor’s video on making shingles, the roof went together. Its suitably rough and weathered even without paint. But… Something was off. Dave commented on it, and there was something in his tone that told me my gut feeling was right. Version #2 wasn’t it.

So Version #3 came to be. I used the top of the smallest box as a core, to again give it strength and solid lines. I built a brace to hold the axle and for a brief moment of madness thought about adding a mechanism to turn the sails. I’ve detailed my mishap with the sails here, so i won’t go into it again. Suffice it to say, those also had multiple versions. I crafted more shingles, and got to roofing the top.

And it was done. 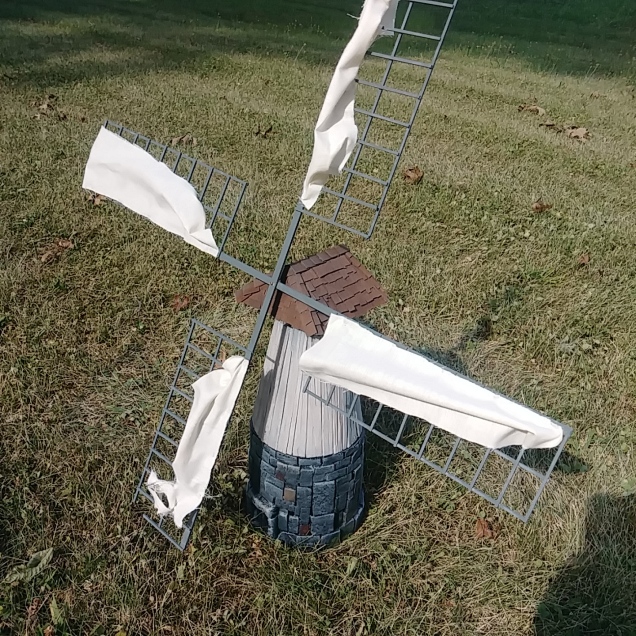 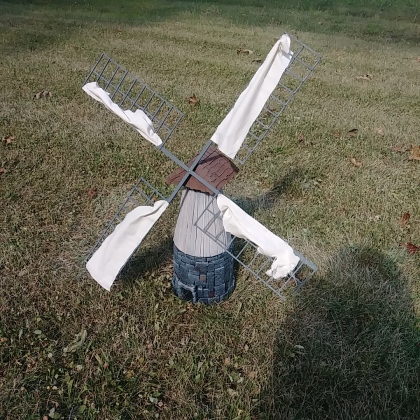 I took it outside for some bright sun pics. And, well, I like it. The sails need weathering. The roof doesn’t match really, but maybe it just got new shingles and they haven’t weathered yet. All in all, I am pleased. Its the biggest terrain piece i have even attempted and it was built from materials I hadn’t used much before. It is magnetized, so all three major parts separate. I had a magnet from a hard drive that is strong enough to support the sails.

Oh, and much to my surprise. The sails turned in the wind. To say I was giddy is an understatement. I haven’t ponied up for WordPress yet, so I had to upload the video to YouTube. Here it is if you care to check it out. Windmill

I was also able to build and paint a Wild West building to use with Dead Man’s Hand, It was going to be an lawyer’s office and apartment named for a good friend of mine. But, i a moment of haste I painted it in the colors of his rival college… It would not do to have a solid Michigan man working out of an office painted in the colors of that other school. so in homage to my daughter’s love of literature I grabbed a name from her favorite series and made it the offices for some freighters in town. 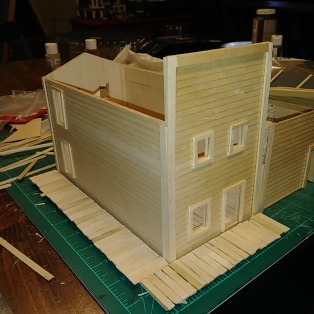 The roof is standing seam metal from Evergreen Plastics. It looks fantastic. The lettering on the sign was down with dry rub transfers. It came out ok. Not great, but kinda has a old feel to it. Like it was more hand painted. I had smaller letters to add more to it, but the were so old they disintegrated when i tried to use them. New in the package, decades old on the shelf.

Thanks Dave, for the push! Two projects completed. Go to his blog and look at all the really cool pieces created by the the other participants. The Summer of Scenery was a big success!

Thanks for stopping by, and I would love to hear what you think, so drop me a comment below.

Atlas of Ice and Fire

The geography and maps of George R.R. Martin's A Song of Ice and Fire and other fantasy worlds

War Across the Ages, and other dark horrors

A discussion of miniatures collecting, painting and gaming.

A hobby blog of miniature people and big adventures!

Travelling around the world and painting miniatures

A futile fight against entropy or 'Every man should have a hobby'? Either way it is a blog on tabletop wargames, board games and megagames

A discussion of miniatures collecting, painting and gaming.

Gaming and thoughts from a small building...

Gaming in Blackshaw Head
THE CHRONICLES OF HISTORY